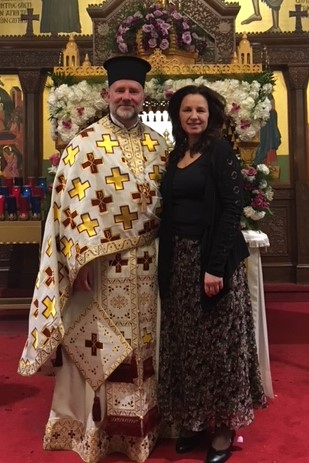 Father Andreas was ordained as Deacon and as Priest by His Eminence Metropolitan Gerasimos of San Francisco. His Eminence Metropolitan Methodios of Boston elevated him to the rank of Pnevmatikos (Spiritual Father). Father Andreas has been appointed by the Metropolitan as the Representative for District I of the Metropolis of Boston (most of Vermont and central & western New Hampshire); he is also Treasurer of the St. Andrew Clergy Brotherhood of New England. Father is a commissioned officer with the Vermont State Guard, holding the rank of Chaplain (Major). He is the Spiritual Advisor for the active OCF chapter at Norwich University – The Military College of Vermont.

Father Andreas received a Master of Divinity with High Distinction degree from Holy Cross Greek Orthodox School of Theology, Brookline, Massachusetts in May, 2012. He earned a Bachelor of Arts degree in Political Science from The College of Charleston, South Carolina in 1992. He also completed post-graduate study in Accounting at the University of Louisville, Kentucky. For fifteen years before Seminary, he worked in the field of corporate finance as a controller and financial analyst, primarily in manufacturing and the entertainment industry. Father worked in Kentucky, South Carolina and California.

Father Andreas was born in southwestern Ontario to an American mother and European father, the third of four children. He attended St John's-Kilmarnock School in Waterloo Region, and served as a cadet with the Royal Highland Fusiliers of Canada. Fr. Andreas was tonsured as a Reader at St. Katherine Greek Orthodox Church of Redondo Beach, California, and later, Father and his future Presvytera (title of the priest's wife) were married there. Fr. Andreas and Presvytera Mari have two children, Alexandra-Panagiota and Ioannis.

In August, 2009, Father Andreas “left the world” and went to seminary to begin his second career and true vocation. While a seminarian, Fr. Andreas was assigned to Sts. Constantine and Helen Greek Orthodox Church, in Cambridge, Massachusetts, a historic inner-city community. There, he re-established GOYA and assisted the priest in pastoral and administrative duties. He also served an internship with the Chancellor of the Metropolis of Boston, where his responsibilities included Leadership Development and OCF coordination. After graduation from Holy Cross, Fr. Andreas served as Metropolitan Methodios's Deacon.

Father Andreas has been honored as a Kentucky Colonel and Aide-de-camp to the Governor of Kentucky. To relax, Father enjoys spending time with his family, cooking, baking prosphora, reading, and shooting landscape photography.